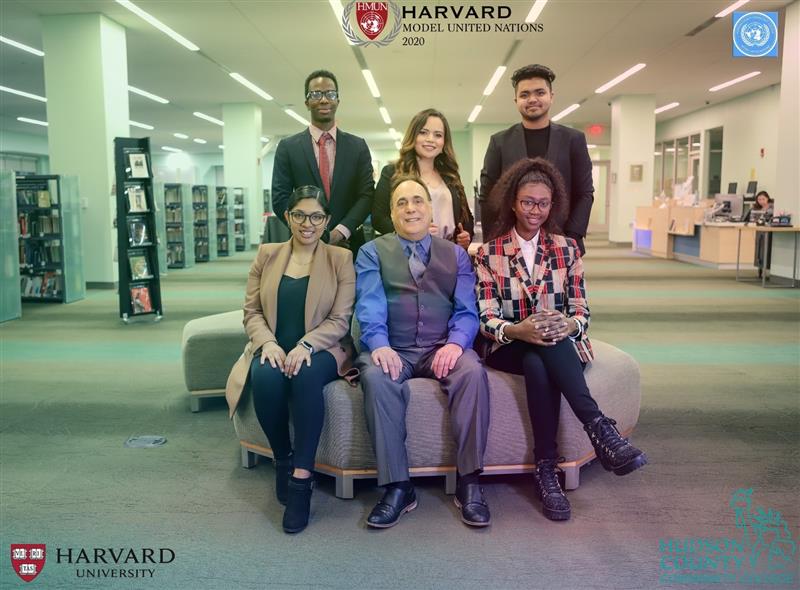 “The preparation was all about getting to know our country well, know the relations within other countries, and know all the terms and guidelines given by Harvard Model United Nations depending on the committee chosen,” Criollo stated.

For 66 years, Harvard University has hosted their National Model United Nations Conference, where roughly 2500 students at the collegial level “come together to diplomatically debate and propose solutions to the world’s most pressing issues.”

HCCC’s Model UN team were assigned to three committees in The General Assembly, in particular the Disarmament and International Security Committee (DISEC), the Economic and Financial Committee (ECOFIN), and the Legal Committee.

“All the committees had to write a position paper according to their topic area given by Harvard MUN” Criollo stated.

HCCC’s Model UN Team were assigned the Syrian Arab Republic, meaning all of their research on the country had to prepare them for the topic questions proposed for each committee.

The advisor for HCCC’s Model UN Club is interim Dean Joseph Caniglia, who has been advising the club for several years, and whom the team members thank for all the support they received which played a big role in driving them to the success of the conference.

“Professor Caniglia was a support to us during our preparation… He would check to see if we were adapting to the environment and if we needed help with the papers that had to be written at the meetings,” Criollo stated, adding, “Thanks to Dean Caniglia, I was able to be part of this fantastic experience. He believed in all the six of us at all times.”

But when asked what being a part of something as remarkable as Harvard’s Model UN Conference meant for her personally, Criollo had much to say about her personal experience.

“Though it might have seemed like a lot, it was really fun. I got to speak with various people from all over the world, hear their ideas on world situations, and work in a fast-pasted environment, learning and implementing what I have learned in the classrooms” she stated.